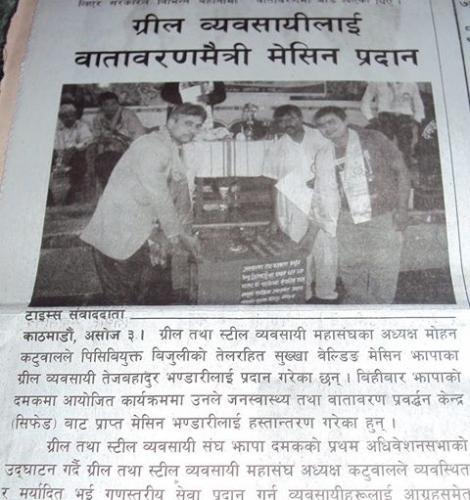 Persistent Organic Pollutants (POPs) are chemical substances that persist in the environment, bio-accumulate through the food web, and pose a risk of causing adverse effects to human health and the environment. This group of priority pollutants consists of pesticides (such as DDT), industrial chemicals (such as polychlorinated biphenyls, PCBs) and unintentional by-products of industrial processes (such as dioxins and furans). As of today 23 Chemicals has been listed as POPs under the POPs Convention.

Most of the pesticides were initially synthesized and commercially produced by the industrial countries with higher technological development. Such chemicals entered into developing countries like Nepal, where production infrastructure was not of the required scale, either in the name of grant assistance or in the name of technology transfer. Substantial amount of pesticides were imported for use in agriculture and vector control program in different time-frame, neither matched with the demand nor timely used up and keep on storing thus became obsolete. There were over 75 tonnes of obsolete pesticides including 45 % of identified and mixed POPs were stored in some 26 locations in Nepal, threatening public health and environment.

CEPHED Initiatives:
CEPHED as an organization and its scientific research team members directly as well as indirectly contributed in several research, awareness building, capacity building as well as even served as an expert team members to develop Nepal`s first National Implementation Plan (NIP) to provided the expert opinion and even advocated and fought for the legal remedies of the sound management of obsolete pesticides including POPs Pesticide and PCBs. Additionally CEPHED has successfully developed Environment Sound Health Care Waste Management Model and PCB Free Grill Metal Fabrication thus completely eliminate the release of POPs and its sources.

Preparation of National Implementation Plan (NIP):
First NIP for the Stockholm Convention on POPs under the UNIDO Contract GF/NEP/02/018, funded by Global Environment Facility with the Government, Mr. Ram Charitra Sah, Executive Director, CEPHED provided his expertise for preparation of Management Option and Technology Transfer as the part of NIP preparation expert team of Nepal. The NIP first prioritized the management of Obsolete Pesticide.

Management of Obsolete Pesticide including POPs:
According to NIP, there were 74.5151 Metric tons of old stock of pesticides in Nepal, out of which about 10.058 m. tons were identified as POPs pesticides, whereas 23.610 M tons were found in mixed form, which after laboratory analysis were also confirmed to belong to POPs pesticides thus increasing the total amount of POPs pesticide to 33.668 M tons were awaiting since last 30 years for its sound management.

With the continuous efforts of Government Agencies (MOSTE, MOAg), its concerned departments, Non-Governmental Organization and medias, in year 2012, with the financial and technical assistance from German Society for International Cooperation (GIZ), all the obsolete pesticides including POPs Pesticides were sent back to Germany for their complete destruction and environment sound disposal.

PCB Management
CEPHED carried out first ever research on PCB POPs and its impact on Public Health and Environment specially on the Grill Workers who has been using PCB contaminated old transformer oil in their welding machine thus exposed to not only PCB POPs but also other two carcinogenic POPs like Dioxin and Furan getting emitted from incomplete burning of PCB contaminated transformer oil in their welding machines.

CEPHED made available information and know how to all grill workers and other concerned through organizing the workshops in different part of the country through POPs project implemented under UNDP GEF SGP and also developed PCB Free Metal Fabrication Workshop by promoting Dry welding machine as alternative Best Available Techniques (BAT)over wet welding machine (machine that uses transformer oil) thus curbed and eliminate the release of POPs chemicals such as PCBs, Dioxin and Furan and hence prevent exposure and protect public health as well as the environment.

Banning of Endosulfan
Endosulfan: The fifth conference of Parties of the Stockholm Convention on POPs held in Geneva from April 25-29, 2011 has decided to add 22nd Candidate �Endosulfan� as POPs Chemicals list.