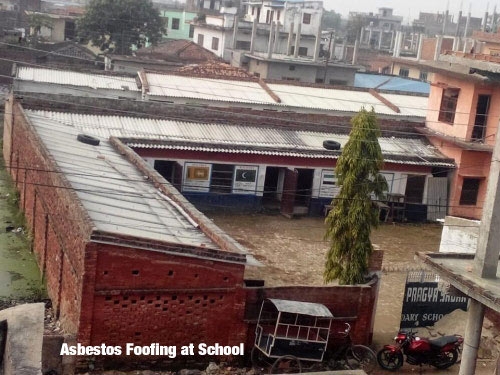 Asbestos and asbestos based products, has been imported and used in the different rural to urban area for various purposes from roofing of residential homes, shops, school (picture), garage, industrial units, automobile break shoe, lining to insulating materials etc. in Nepal. There are increasing uses of Asbestos sheets in country especially in the Terai Region as roofing material without any information and awareness about its health consequences.

Asbestos is one of the most important occupational carcinogens, causing about half of the death from occupational cancer. According to global estimates at least 90,000 people die each year from asbestos-related lung cancer, mesothelioma and asbestosis resulting from occupational exposures. Worldwide, WHO has explicated that 125 million people are potentially exposed to asbestos, One-third or around 75 million of these are in the South East Asia and Western Pacific Regions.

World Health Organization (WHO) and International Agency for Research on Cancer (IARC) already identified that all form of Asbestos are carcinogenic to human. With known fact, asbestos being one of the major causes of cancer as well as various other health implications, the import, export and use has been prohibited in 40 countries globally. In context of Nepal, there are not any firm research activities to denote the number of cancer patients in the country.

However, it is believed that there are tentatively around 35000 to 40000 cancer patients in the country. Among the 10 major reasons behind the death, ARI/Lower Respiratory Tract Infection and Upper Respiratory Tract Infection lie at fourth and fifth major reason in Nepal (MOHP). There is a proven close inter-relationship between the asbestos with these respiratory tract infection related problems stating the critical situation.

According to the Department of Custom, Ministry of Finance, Government of Nepal, different amount of Asbestos has been imported from various countries to Nepal. According to import data, Asbestos imported in Nepal in years 2010, 2011 and 2012 were 1554 tons, 1244 tons and 1195 tons respectively. Asbestos has been also imported in the form of other products such as break shoe lining, sheets, cements, tiles, and insulating materials and compact fibre sheets.

Nepal is party to both Rotterdam Convention and Basel Convention and hence need to adopt all the control measures inbuilt in them. The Rotterdam Convention on the Prior Informed Consent listed Asbestos amphibole group and chrysotile in Annex III of substances subject to the prior informed consent procedure. Furthermore, wastes that contain asbestos dust and asbestos fibres are considered a hazardous waste (Annex I, item Y36) under the Basel Convention on the Control of Trans-boundary Movements of Hazardous Wastes and Their Disposal, and are, therefore, subject to strict control.

Till recently there was no specific policies and regulation directly dealing with import, sales and distributions as well as use of asbestos are in place with respect to environment and public health ends. In this situation, the bans imposed by the Government of Nepal, Ministry of Science Technology and Environment (MOSTE) through publishing a notice in Nepal Gazette (Khand 64, Number 30, Part 5, Date December 22, 2014, Notice No. 4) is right timely, progressive, public health and environment friendly, CEPHED welcome this government move to ban Import, Sale, Distribution and Use of Asbestos Sheets, Tiles and Insulating Materials in Nepal and urge for its effective implementation by all.