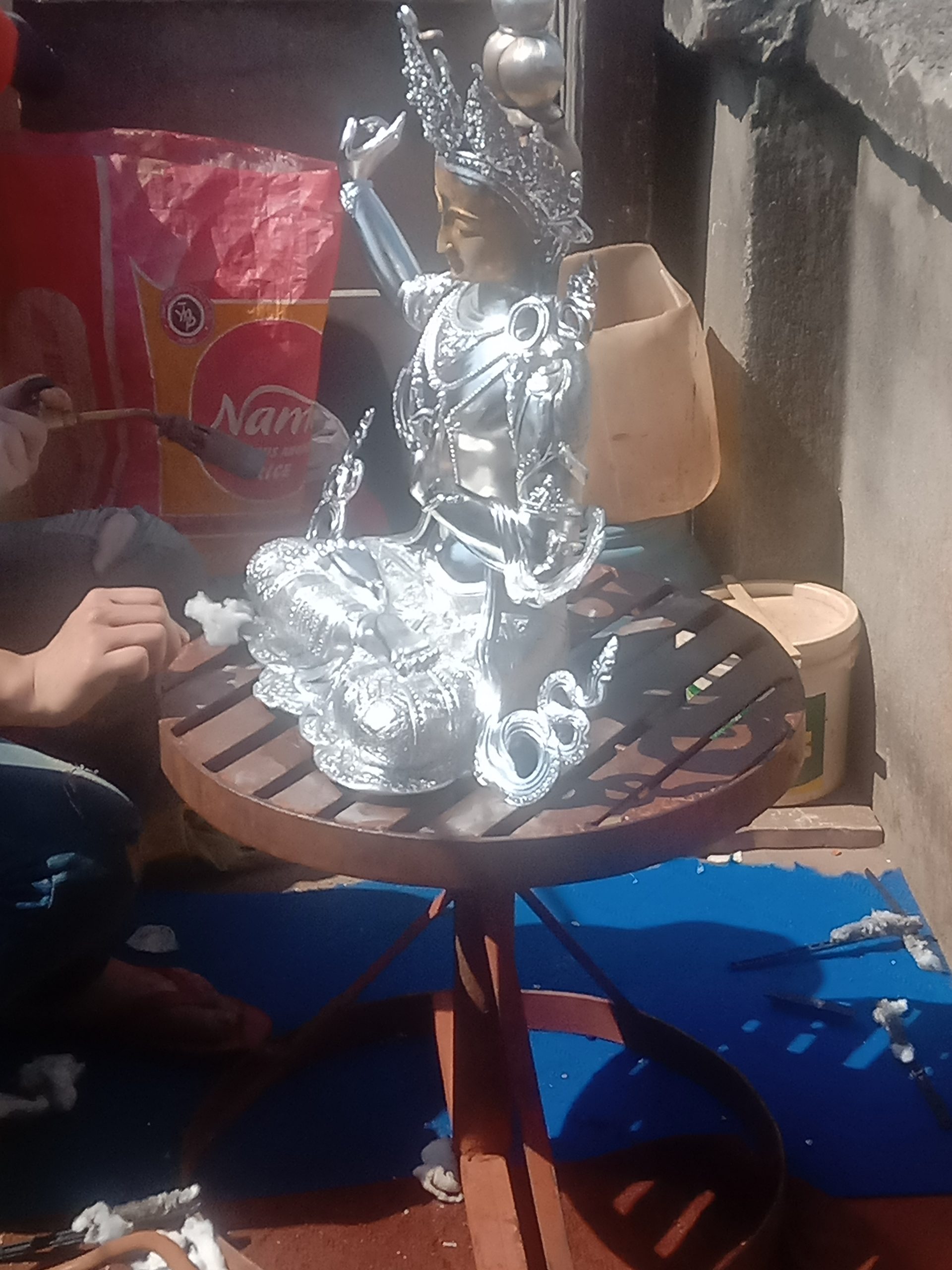 Gold plating (gold-mercury amalgam) is one of the most hazardous works primarily practiced by an ethnic community in Nepal and has a history of many centuries. Metal plating is a process in which gold coating/painting will be done on the metal statue (sculptures) by mixing mercury and gold together though hand held mortar and piston for an extended hours thus prepared paste/amalgam of gold and mercury applied over the metal statue and then heated the statue to evaporate mercury resulting gold coating remains on the statue.

In all these process from making mercury and gold paste, applying this on the statues and heating to evaporate the mercury without using any protective gears, workers get direct and very high level of mercury exposure as well as also resulting very high level of environmental (air, water, soil ) burden of mercury (https://youtu.be/Tk9HZUYQc6s). The workers were not informed at all and found to be totally unaware about ill effect of mercury.

The exposure to workers is metallic vapor inhalation and dermal absorption as they directly handle mercury in the workplace, often without necessary Personal Protective Equipment’s (PPEs). The bio monitoring of mercury among 20 metal plating female workers revealed very high level of mercury exposure. The average level of exposure is 3.62 ppm and exposure among workers ranging from 0.35 to 28.46 ppm[1]. 75% (15 of 20) workers` samples exceeds mercury exposure level over 1 ppm. This finding revealed that populations involved in gold plating business are at high risks of mercury needs national and global attention for immediate preventive measure and medical assistance.

Government of Nepal signed the UN Minamata Convention on Mercury on 10th of October 2013. The Minamata Initial Assessment (MIA) 2019 report of Nepal were submitted to the secretariat in early 2019[2]. According to MIA report, total annual release of mercury in Nepal for the base year 2016/17 were estimated to 19615 Kg Hg/y, which includes less than 35% (6,790 Kg Hg/y) from different source categories identified in UNEP Toolkit and over 65% of total (12825 Kg Hg/y) from gold plating business alone, has been identified as the largest source of mercury release in Nepal.

Another CEPHED s 2020 study of mercury contamination in the waste water discharge from metal plating workshops revealed that 00 % (5 of 5) waste samples released from workshops has very high mercury contamination ranges from 0.627 mg/L to 11478 mg/L which is 62.7 to 1147800 times more than the Nepal Generic Standard of Waste Water effluent for Water ways as well as standard for in land (0.01mg/L) discharge[3]. These untreated wastewater has been discharged on inland surface or small drainage leading to river pollution.

In Nepal, more than 400 families (with avg.10 workers in each family) are involved in this business and thus around 4000 people are directly exposed heavily to mercury during gold plating process along with the nearby communities. Such populations need urgent attention and their workplace needs immediate improvement to make it safe and free from risks associated with the use of mercury though introduction of sound mercury recovery technology and/or alternative metal plating such as electroplating to minimize or eliminate the adverse effects of mercury.

Related ILO Publication with Nepalese gold plating case study  can be download and read full report: Exposure to Mercury in the world of work: A review of the evidence and key priority actions – ILO report, January 2022.